Fiona’s ordination as an Elder 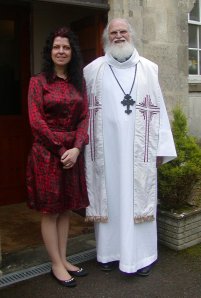 In our Sunday service on 20th February 2011, Wootton Bassett United Reformed Church welcomed Fiona Butler as a new Elder. Rev Thomas MacMeekin led the service including Fiona’s Ordination and Induction. Her parents, husband and children were in the congregation. Thomas reminded the congregation that in the URC we give thanks for the various gifts of all the people of the Church, and that as well as Ministers of Word and Sacrament, Elders are ordained. Jenny and Eileen joined Tom in giving the right hand of fellowship. After the formal words of Ordination, Tom encouraged Fiona to think of the new challenge and opportunity the role would bring. He explained to the children that the name did not mean that Fiona was old and indeed he had in the past ordained a girl of 16 to be an Elder!

This entry was posted in News. Bookmark the permalink.